Overdue account problems are more unlikely to occur if a business conditions its customers from the outset. If you do not enforce your credit terms, you are asking them to be ignored.

Figures show that a debt overdue by one month has a 93.8% chance of being paid.

Not only do your chances of collecting an account diminish with time, so does the real value of the dollar you collect.

The value has been reduced by: 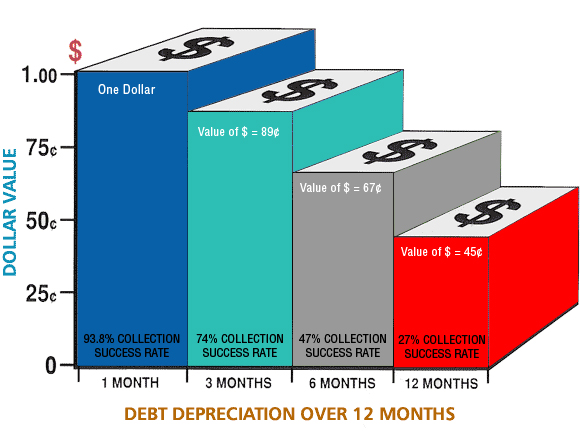 Google Rating
4.6
Based on 9 reviews

Bhishan Shrestha
02:41 10 May 19
Very reliable debt collectors. JMA credit helped me to collect debts in short time without much of a hassle. Highly recommended!

Prashant Gurung
02:31 10 May 19
I am very happy with the service they provided me to recover my debt. Their customer service team were very understanding, polite and professional. I highly recommend JMA Credit Control for personal or business debt collection.

Danish Kapoor
02:25 10 May 19
Very happy with the service provided. They helped my company collect debts around $10k. Highly recommended.

Kevin Deng
01:06 18 Jul 18
We highly recommend JMA credit control for any businesses who might struggling with debt collections. Mark is very professional and efficient, and he's been very helpful! Thanks again!

Twin Electrics & Plumbing
23:08 21 Nov 17
We highly recommend JMA Credit Control for any businesses that might be struggling with debt collection. They are very efficient and professional with every aspect of their company. Keep up the great work!!

Aashath Kaamil
03:40 14 Nov 17
Our business have been using JMA Credit control for over 3 years now and they got us back a lot of our money. Simply the best debt collection agency in Melbourne. Very impressed with their customer service and reporting. Highly recommend them for businesses who have trouble collecting overdue invoices.
See all reviewsWrite a review

If we cannot recover your debt, you will not be charged Commission.